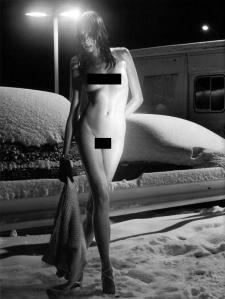 The Washington Post reported Tuesday that a Pakistani court ordered the release of a hard-line Islamist cleric with ties to last year’s deadly attacks in the Indian city of Mumbai, setting the stage for a new round of tensions between the neighboring countries.  And Reason Online reported Monday that pointless regulations are ruining British pub life, as customers must stand in “post-office-style” lines, no drinking is allowed while in line, and no one can order more than two drinks at a time — regardless of whether they’re with a group.  Pubs that want to promote a discount special must notify police seven days in advance.  Meanwhile, Essential Baby reported that aging women who want to keep motherhood an option are freezing their unfertilized eggs for $12,000 a pop, hoping to have them thawed and fertilized in the future.  Inebriated reporters busying themselves by drinking three pints at a time in our news offices, and eating fried eggs by the dozen, thus destroying some chickens’ future, wonder when they should start buying assault rifles in preparation for the terrorists who will likely be showing up any day now. 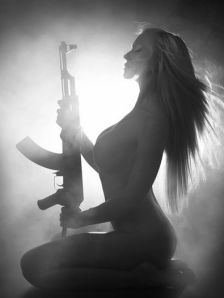 “I’ve heard a lot of good things about AK-47’s and I guess even the Chinese versions of the Russian gun are pretty good.  With a little practice I could probably take down some asshole son-of-a-bitch Islamo bastard,” said Lacy Racy-Smoothbottom, a sweet talking, well toned part-time writer and full-time stripper down at the Lazy Space-Cadet Lounge and Hyperbolic Chamber.  “We may even have to use them to take the West back from Statism with all its bureaucratic over-regulation that stifles commerce, individual freedom and a good time.  The Islamofascist and Socialist-Statists are all bent on control and consolidating power over the individual.  It’s a crime against individual rights, free market economics and common sense.  As far as the egg freezing thing goes, I’m not up for that.  If I decide I want a family I’ll do it the old fashioned way.  Get married and get knocked up.  If it doesn’t work out we can adopt.  I’m not doing the $12,000 freeze-thaw, dump my guy’s sperm in a Petri dish and see what happens stuff.  I’m not saying its wrong or anything, but it’s not for me.  Call me old fashioned, but I like the physical effort of doing it myself.  If I can’t get pregnant we’ll adopt; nothing wrong with maybe saving a kid from some abortionist’s knife.  It might be the best thing for everybody.  Especially the kid.” 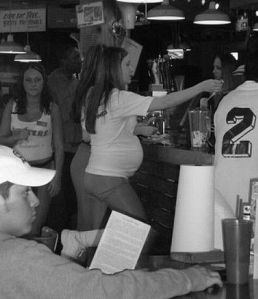 Not everyone agrees with Racy-Smoothbottom.  “No one should have an assault rifle or any weapon that can hurt another person.  As soon as we ban all guns we’ll have peace in our time.  The radical clerics just want to talk and reach an understanding,” said Heather Halfpint-Shorrt, an 8-month pregnant Hooters waitress currently suing the restaurant for making her wear a full sized T-shirt instead of a little halter top.  “And it’s good that Brit pubs are putting hard rules in place, we don’t have enough customer-control rules in Hooters.  We should make everyone pay tips in advance and let that determine how good the service is, and stuff like that.  As far as freezing my eggs now for later goes, well to be honest, I’m kind of past the point of caring about that.” 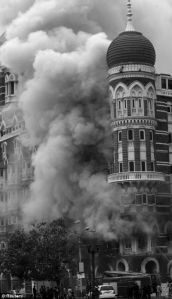 The Washington Post reported that Pakistan’s Lahore High Court’s decision to free radical cleric Hafiz Mohammed Saeed, a hard-liner linked to last year’s deadly attacks in the Indian city of Mumbai, came amid growing tension in Pakistan’s northwest, where security forces on Tuesday rescued dozens of students and teachers kidnapped by militants and where the army continues to battle Taliban fighters in the Swat Valley. India has demanded Pakistan vigorously pursue those behind the November siege of its commercial capital that killed 164 people and left nine of 10 gunmen dead. Pakistan has said it took several alleged suspects into custody, including Saeed, the head of a charity that the U.N. says is a front group for Lashkar-e-Taiba, the militant organization blamed in the attack. But the Muslim-majority country has a poor track record of prosecuting alleged militant leaders, and India and Pakistan argued for weeks after the attack over the proper amount of evidence needed to convict the suspected masterminds. On Tuesday morning, Saeed’s lawyer, A.K. Dogar, emerged from the courthouse to declare that jurists had decided Saeed’s continued detention was without basis. There was no immediate Indian comment Tuesday. 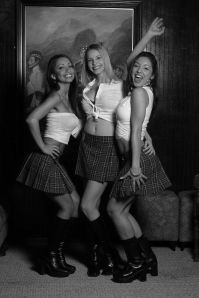 Back before draconian laws ...

Reason Online reported that if you want to buy a drink at a pub in Oldham, northern England, you must stand in an orderly “post-office-style” line. It must be a straight line, starting one meter from the bar, with barriers, signage, and a “supervisor.” There must be no drinking while standing in line, and no drinking within one meter of the bar. Customers cannot order more than two drinks at one time. And if a pub wants to advertise discounted drinks, it must give the police and local council at least seven days’ notice. Pubs were once one of the most autonomous spaces in Britain; now they are one of the most regulated. The pub landlord has lost his dominion, and pubs need a local authority license for almost every possible activity that goes on within their walls. One Staffordshire pub hurriedly axed its 25-year-old dominos team, when police discovered that it lacked a license for sporting activity. Once the landlady had acquired a license, though, she discovered that nobody would be allowed to watch the dominos, since this “would constitute a live sporting event” and require a further license. The pub was also missing other key licenses, she said: “I was told that I couldn’t have music playing, I can have the TV on but with no sound. The regulars can’t sing any songs.” Dancing also requires official paperwork. One unlicensed York pub was threatened with a £20,000 fine, after an “impromptu jig by pensioner Mavis Brogden.” Police officers now have unprecedented legal powers over public houses. 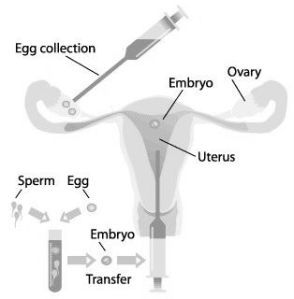 Essential Baby reported Monday that more and more women who are single but aging and want to keep the option of motherhood open while not rushing into parenthood, are having their unfertilized eggs frozen before their fertility goes into decline.  An increasing number of women in their 30s, have opted for the treatment originally designed for those facing fertility-damaging cancer therapies. Women pay almost $12,000 to have unfertilized eggs extracted from their ovaries and then frozen and stored until they’re ready to try for a baby. In Brisbane, Australia each year, more than 100 women in their 30s are having their eggs frozen by the Queensland Fertility Group, which advertises its services to GPs and in newspapers and leaflets in women’s health clinics. “Social egg-freezing” has grown a lot over the past five years as techniques for egg-freezing have improved. Melbourne IVF, which has done 32 “social” egg freezes in the past decade, has now had two babies born from such eggs. According to Melbourne IVF fertility specialist Dr Kate Stern, new techniques have improved the survival rate of thawed eggs from one in five to six in 10. 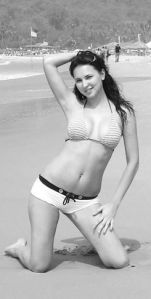 In other news, MosNews reported Wednesday that Russia has selected Miss Atom 2009.  As usual, all the 350 contestants that competed for the title had one more thing in common, apart from being beautiful: they all work for the Russian nuclear industry. The beauty contest, held this year for the sixth time, only features employees of nuclear energy agencies and research institutions.  This year’s participants came from Russia, Ukraine, Belarus, Kazakhstan and Lithuania. The first prize, a trip to Cuba, went to Yekaterina Bulgakova, legal consultant at the Institute of Research for Atomic Reactors (NIIAR).  No word on whether she has her own AK-47, likes pub regulations or plans to have her eggs frozen now for later, but with that rare combination of both beauty and brains why would I worry about that?  Meet me in Cuba!

Two Pints of Non-Alcoholic Lager and a Packet of Fat-Free Crisps
How pointless regulations are ruining British pub life
http://www.reason.com/news/show/133827.html

How ‘social egg-freezing’ is putting motherhood on ice
http://www.essentialbaby.com.au/parenting/conception/how-social-eggfreezing-is-putting-motherhood-on-ice-20090601-bs8o.html

Comments Off on Terrorists Roam Wild and Free, Pubs Get Hard-Ass Regulation, and Motherhood Goes on Ice