WSMV-Nashville reported last week that a man was tortured in his home by teenagers using heated barbecue tongs and demanding cash.  Finding no money, they stole his baseball cap collection.  And the UK Sun reported that when it comes to protesting or raising money for a good cause, more and more people are turning to public nudity to get attention.  Meanwhile, the UK Telegraph reported that a woman who spent hours on a roller-coaster-ride went to the hospital with stomach cramps only to discover she was about to give birth.  “I had no idea I was pregnant,” said the fun-park attendee.  Pundits are debating the societal roller-coaster ride of in-home BBQ torture, nude protesters and women shocked to find kids falling out between their legs when all they want to do is have fun.

Will Obama ban this weapon?

“I remember the time I was surprised by nude PETA protesters giving birth using BBQ tongs outside a grocery store one afternoon in Des Moines, Iowa,” said Bob Thumb, a fry chief and part-time vagrant, always trying to hitch-hike a ride someplace.  “They were saying that Iowa pigs needed more room to give birth and where demonstrating how tricky it is to have kids in a small confined area on the plaza.  I think they’re all nuts, but it was still pretty darned interesting.  The screaming kind of took the positive edge off my experience, but it was pretty cool anyway.  I’d still rather have Pam Anderson protesting nude, but hey, this is Iowa and we take what we can get.  That’s why we still have all the politicians start their presidential campaigns here.”

Not everyone sees it the way Thumb does.  “Nude protests and accidental births are more signs that the world is in an ethical free-fall, and kids torturing a guy in his home for his baseball-cap collection just reinforces that.  Society has lost all traces of common sense and has gotten so lenient we’re letting the whacko’s do what they want in the name of freedom, while the innocent regular folks get shit-on without justice,” said Nancy Drew-Colt, an opinionated fire-arms dealer who packs heat and routinely kicks idiots in the ass because they deserve it.  “And all the Obama talk about ‘change we can believe in’ is followed up with comments that he disagrees with most of the U.S. Constitution indicates we’re continuing to shift away from the traditional values that build this country.  No wonder he didn’t want to wear American flag lapel pins and hung around with convicted racketeer Tony Rezko, anti-American Preacher Jeremiah Wright, Pentagon bomber Bill Ayers and of course Illinois Governor Rod ‘This-Senate-seat-for-hire’ Blagojevich.  The change we’re getting is old-style Chicago politics dressed up in high-tech internet communications.  Yee-ha.” 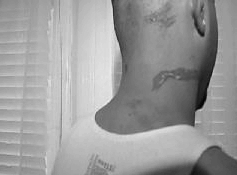 WSMV-Nashville reported Antonio Viegas was sound asleep when he heard his wife scream. She was out warming up her truck for work. The next thing Viegas knew, three teenagers were in the bedroom, throwing the couple to the ground. During the struggle, one of the robbers’ guns went off, Viegas said. The three teenagers kept demanding cash. When Viegas told them his money was in the bank, they pistol-whipped him, he said. The teens disappeared into the kitchen, where Viegas said they heated barbecue tongs and burned him repeatedly on the neck. Convinced Viegas wasn’t lying about the bank, the teens took his shoes and his baseball cap collection and fled. Because of the torture, police consider these teenagers extremely dangerous.

good cause, some people show plenty of naked ambition – literally! Staff at cosmetic firm Lush in Berlin peeled off to make a stand about plastic packaging earlier this week. But they’re not the only ones to get down to the bare essentials to raise awareness about an issue. Members of the public in their hundreds and celebs such as Paris Hilton, Danielle Lloyd and Sarah Michelle Gellar have stripped off to help make the world a better place.

The Telegraph reported that a woman spent hours being thrown around a corkscrew-style roller-coaster ride – unaware she was pregnant and about to give birth. Issy McMurdo was taken to hospital just days later with excruciating stomach cramps which she believed had been caused by something she had eaten. But nurses told the surprised 21-year-old that she was actually in labor. Miss McMurdo, a barmaid, said: “It was a massive shock when they gave me a scan and told me I was in labor. I simply had no idea I was pregnant. I thought I had just put on a little bit of weight. I even went to Alton Towers where pregnant women are warned not to go on the rides. I was flung upside down on the Air ride at speeds of up to 50mph and hurled down drops of 53ft, so it was quite lucky I didn’t go into labor there.”

Some people say it’s the lack of awareness in society today that is causing all the trouble.

“People in Britain are unaware they’re pregnant and about to give birth, and people in the United States are unaware they just elected a one-term U.S. Senator with no business or governing experience the President, and are about to have their Constitution torn apart,” said Abraham Washington-Lincoln, a fictional character left to make sense of things in the world after most of the real people have abandoned reality.  “People all think they’re voting for the next American Idol TV star instead of President and think that sex and pregnancy are unrelated.  Because nobody notices anything women are going naked in droves trying to get people to notice a cause or product — Paris Hilton is selling champagne nude, Pam Anderson is selling animal ethics naked, Sarah Michelle Gellar is talking up skin disease by showing all of hers and naked people are talking against plastic packaging, etcetera, etcetera. And what are people thinking about when they see them?  Not the cause you can bet on that!  At least most of them look good nude.  Looks may only be skin deep and beauty in the eye of the beholder, but if you’re not going to pay attention to reality you may as well get your heart rate up because it’s healthy.  At least that’s what the article called ‘An eyeful a day keeps the doctor away’ says.  Maybe strip clubs are really health clubs after-all.” 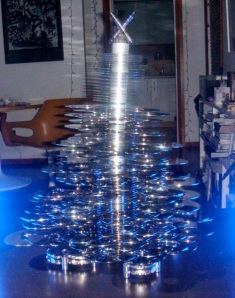 In other news, Gizmodo reports that a guy made a Christmas tree from 70 recycled computer hard drives.  No word on whether he was nude and using tongs, or if he’s unknowingly made anyone pregnant, but at least the “tree” looks good and won’t hurt the U.S. Constitution.  Finally, something to be thankful for.

Comments Off on BBQ Tong Torture, Nude Protests, and Trends in Roller-coaster Birthing