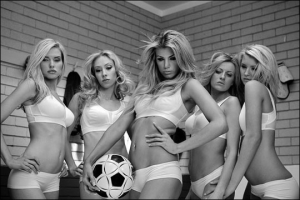 Inebriated investigative reporters hiding in the trunks of cars, behind trees and inhabiting old film libraries like dust mites, have discovered a movie never seen in U.S. of first-lady in-waiting Michelle Obama, staring in a German stag film.  “Hoochie Fraulein!” is reportedly a forty-five minute flick in which Michelle dances, rebuilds a BMW engine, and then has wild sex with a cast of dozens of hot babe and stud mechanics.  Some film critics claim it’s not the new first lady, but other analysts who study human form and motion, say it’s the wife of The One, no doubt about it.

“The way the Fraulein pulled the pistons out of that BMW and then jumped the mechanic with a smooth muscular motion, displays the same style of physical action that I’ve seen Michelle make when pulling the lungs out of a passing Republican and then getting it on with her worshipers,” said a high level investigative reporter, who refused to be indentified lest he die a thousand deaths through liberal torture of an undefined nature.  “The lanky movements and swing of the hips which knocked a BMW engine off the workbench twice in the film is clearly Michelle’s signature.  And the other stuff that you see when you see what you see makes me believe that it was that gal doing her thang alright.  Don’t know what Barack was up to during Michelle’s movie years in Germany, but I bet he likes the moves she’s got just fine.  Wowsers!”

Not everyone believes the unnamed unidentified reporters and analysts making crazy talk about Michelle.  “Michelle Obama is an elitist who graduated from Princeton University and Harvard Law School, she would never sell herself to the Germans for sex flicks, besides that, she worked on marketing at Sidley Austin, so you know that she’d have positioned herself in French stag films because they sell better,” said Gene Italwarts, an out of work hair dresser, who thinks Barack’s income redistribution plans are better than cats pajamas and men’s underwear.  “Everyone knows that Michelle is the best Hula-Hooper around and can even drop to her knees while hooping, so it’s a gimmie that she’d be Hula-Hooping in French stag films and not rebuilding German engines in one of their flicks.  I mean really.  Use some common sense here.”

According to Wikipedia, Michelle LaVaughn Robinson Obama (born January 17, 1964) is an American attorney and the wife of Barack Obama, who is the President-elect of the United States and Senator from Illinois. She will be the first African-American to become the First Lady of the United States. She was born and grew up on the South Side of Chicago and graduated from Princeton University and Harvard Law School. At Princeton, she challenged the teaching methodology for French because she felt that it should be more conversational. After completing her formal education, she returned to Chicago and accepted a position with the law firm Sidley Austin. At the firm, she worked on marketing and intellectual property. Michelle Obama as well as her daughters are said to be avid hula hoopers. Barack Obama told People Magazine that one of his wife’s secret talents is that she can really hoop. “She is the best Hula-Hooper I know. Once she gets the rhythm going, she can drop to her knees!”

Some people say that everything in life can be done better when you’re on your knees.

“I’ve done some pretty wild shit when I’ve been down on my hands and knees and that’s true whether I was coming or going, Hula-Hooping or changing out engine parts,” said Helga Hildebrand, a statuesque blonde German woman widely known for everything.  “You can say what you want about Michelle, but when she gets out the leather, the Hula-Hoops and the whips and chains, she can fix any car engine and rebuild most men’s Bikes from the ground up.  She takes no shit from anyone and will be as close to a Dominatrix First Lady as we’ve had since Hillary Clinton started carrying Bill’s balls in her purse after the Lewinski affair.  Damn straight.”

In other news, president elect Barack Obama currently carries a Hindu money god in his pocket.  According to an article in The Times of India, the idol did the trick: “It was the magic of Pawanputra Hanuman that did it all,” asserts a convinced Brij Mohan Bhama a member of All India Congress Committee (AICC), and a devoted Obama fan. “It is the triumph of Lord Hanuman on the soils of America,” he declares, and nothing can shake his belief-in Obama or Hanuman’s blessings. No word on whether Barack or the monkey god will make an appearance in the upcoming underground flick: “First Babe Michelle Does Hopes and Chains.” Coming soon to a secret location near you.